But something must be done!

I didn't want to but I had been a few days

(my wetsuit and booties were completely dry)

but the conditions, once again, were less than appealing.

One dominate swell overpowering the rest of the weak wind swells 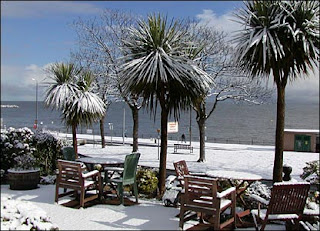 Holy snow on the beach Batman!

Now I am familiar with summer flatness

(especially now that the contest is in town)

and that the clouds come and go without regard to the calendar month, has gotten to be tolerable if still not acceptable.

But please give me some warm water to frolic about in!

So what to do?

Climate Change (conditions like these is why the "Global Warming" label didn't pan out) is a difficult subject and many esteemed scientists have studied the problem without avail.

So I dig back into old stone age surf lore

and call for a

Now the traditional surf sacrifice involved burning a surfboard at the beach during a night of drunken revelry. 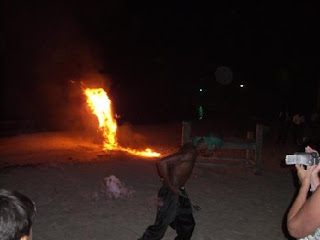 Hey is that my board!

Now I'm sure this was well intended but anyone who has been down wind of a burning surfboard (and yes I have been) will tell you that this is more likely to piss off the earth spirits rather than appease them.

The ever popular "let's sacrifice a virgin" thing is pure Hollywood at its worst and of all the places to look for a virgin, Hollywood would probably be my last choice.

So what to do?

Some hybrid asymmetrical combination of  the two? 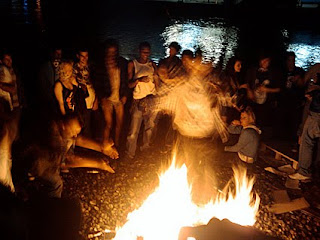 Dude, get out of the fire!

Perhaps, but then again the liability insurance for something like this has got to be  astronomical!

We have now entered the "play along at home" part of today's blog post.

I have a few ideas about what would make a fitting surf sacrifice but I would like to hear from you.

So use the comments section to contribute your ideas for a weather changing sacrifice.

Remember we want to bring us out of the summer surf doldrums we find ourselves, so miscellaneous witchcraft and magik that will make me rich and help me lose weight has already been covered by todays junk mail.

We don't do something about these conditions now, how might it effect the coming winter?