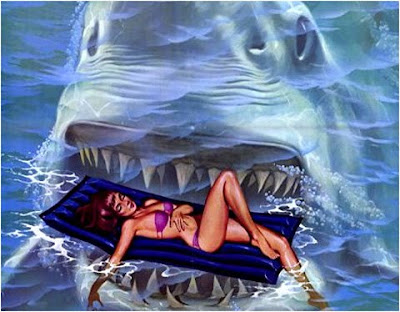 Smack dab in the middle of summer

(OK, that it's really summer despite what the calendar says is debatable)

Which is not altogether a bad thing... 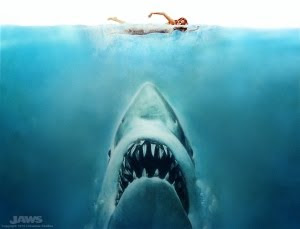 Here in occasionally sunny and  ridiculously over crowded SoCal I'll take it,

(We actually have a movie night in the local inlet where you can float on inner tubes and watch JAWS while floating in salt water, at night!  God love the parks department!)

on the other hand

when I get up in the morning

and attempt to get the kids to come along for a surf,

I get a cornucopia of excuses and semi scientific facts about why they couldn't possibly get in the water today.

Dad, did you know that

The great white shark, Carcharodon carcharias, also known as great white, white pointer, white shark, or white death, is a large lamniform shark found in coastal surface waters in all major oceans. The great white shark is very well known for its size, with the largest individuals known to have approached or exceeded 6 metres (20 ft) in length and 2,268 kilograms (5,000 lb) in weight. It reaches maturity at around 15 years of age and can have a life span of over 30 years. The great white shark is arguably the world's largest known extant macropredatory fish and is one of the primary predators of marine mammals. It is also known to prey upon a variety of other marine animals including fish, pinnipeds, and seabirds. It is the only surviving species of its genus, Carcharodon.


"cooked over medium heat with garlic and butter for 5 minutes the great whites are DELICIOUS!"

Now get in the car!!

Here are a couple of my favorite scenes from the movie

"Were gonna need a bigger boat"

The phrase itself has worked it's way into my verbal interface with the world in too many ways to count.

The mat meet is still scheduled for the middle of  the month BUT  it always depends on the swell etc.  If you are interested please shoot me an email with your contact info and dates your are available or not available.  If we don't get together until the end of the month or oh-my-gosh September I don't think the world will come to a premature end.  I'd would rather get more people on a good day than run it on the appointed day just because  it was mentioned a month ago.  This isn't a surf contest, there aren't permits to pull, no deadlines that have to be met. Just friends getting together to surf a mat. Besides I just looked at some long range forecasts and it looks a little weak. 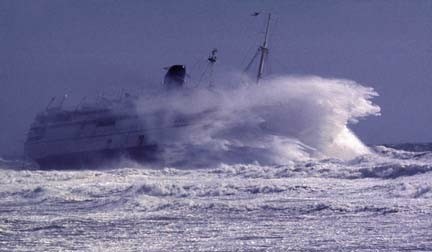