The Surfing Heritage Foundation has the most amazing collection of boards I have ever seen!

If you haven't been to see able to see the whole collection in San Clemente they have an annex in South Coast Plaza West with representative samples from the Duke to Lisa Andersen.

(OK, no hulls and no mats but the bolsa Simmons twin fin with scooped out nose will keep you tripping on board design thru the ages).

Gene Cooper is auctioning off the 12 boards that are included in his 2010 calendar and sharing 20 percent of the proceeds with the SHF.

I gave up the opportunity to watch more Olympic Curling  to attended the auction closing party on Sunday night. 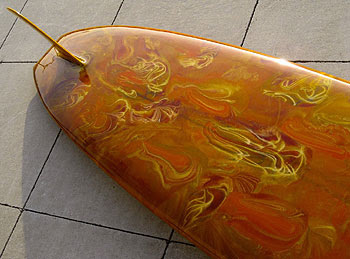 If you have never had the opportunity to see a Cooperfish up close let me just say you are missing out.  I have mentioned before that many surf craft are functioning art.  But these beauties really take-the-cake!

Much of the conversation I had with SHF curator and creative director Barry Haun was regarding if the boards were, in fact, too bitchin' to ride.  (It would kinda be like using the Mona Lisa for dart practice). The only conclusion we could come to would be that it's unthinkable to let such fine work sit on the shelf but than each shatter and scratch would be physically painful!

The other conclusion we came to is that Mr. Haun may have the greatest job in the world! (I know if I worked at the SHF it would be "Hold all my calls! I will be validating the pedigree of the mat collection" or some such nonsense and would, no doubt, be fired within a week.)

While Barry was giving me the grand tour we discussed the idea of a SHF show highlighting the mats, belly boards, paipos and hand planes in their collection.  (I suggested the working title of "It's not real surfing if you don't standing up!" but I think they can do better)

In addition to Mr. Cooper, Jim "the genius" Phillips also attended.  Mr. Phillips shaped a couple of the "calendar boards" and glued up the custom blanks for several of the boards that will be auctioned off in the coming months.

I got to meet Mr. Phillips and personally thank him for shaping my eight footer.  (No I didn't tell him it mostly gathers dust while I ride my mat, that would be TMI in addition to being rude and disrespectful of these master craftsmen.)

Mr. Mike Black,  movie maker, mathematician and pig rider was also in attendance and has posted moving pictures of the event on his blog Surf a Pig .  Mike has been working with Gene on a pig model called the "BLACKBOARD".