... when we last left our intrepid explorer he was still unemployed, reading his way thru the local lending library and gluing pieces to his fins.
Let's tune in to see where today's adventures take us
Today's episode is called,
"bored as heck in supville"
or
"mama, why ain't there no surf?"
we join our blog news program already in progress...
... In other news, local surf forecaster Adam Wright was replaced by a machine by his previous employers.
He will continue to make his surf forecast available at his website
Southern California Surf Forecast
(aside to the co anchor / talking head - "I thought forecasters predicted where your golf shots would go.. (rim shot) ha ha ha, that's right Fred now back to the news)
(Voice over screen shot)
Local action sports retailer Almond Surfboards has successfully channeled both Bob McTavish and a beautifully representative surf board from the era when surfers made surfboards and rode them at their local breaks. Mr. McTavish, who lives in Noosa Australia couldn't be reached for comment. 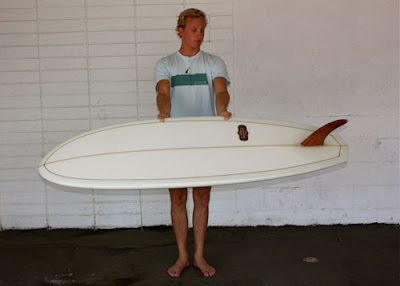 This quaint business model was replaced years ago by large corporations shipping the manufacturing process over seas to the lowest bidder. Then the onshore marketing departments could do their jobs of telling young surfers what to think.
In weather news, Tropical Depression 10 has been cured by massive daily doses of anti depressant that were flushed down the toilet. We expect TD-10 to wobble to the west where he will be someone else' problem. BigHugePill inc, the makers of the anti depressant used to "treat" the depression had this to say about that. "Everyone talks about the weather but we did something about it!" The company spokesman was taken away by federal police after making the statement due to an ongoing investigation with the firms accounting irregularities.

(aside to the co anchor / talking head - "you would think they could come up with a big huge pill for those "irregularities".. (rim shot) ha ha ha, that's right Fred now back to the news)

In sports news today, a new platform was discovered today that allows local surfers to further enjoy their romps at the shore

The device is comprised of an air filled bladder. The bladder itself is made of a space age material called "canvas".

Seeing how the kids were having so much fun the board of dictators for LA County immediately outlawed the riding of mats in the interest of public safety. When asked why the board had passed ordinances preventing surfers from riding their mats, a representative of the board replied "cause it ain't got no string in the front to hold on to, that's why". The board then moved their massive intelligence and political focus on issues such as the economy, the wars and health care.
Good night and have a peasant tomorrow.
I haven't posted music in a while, this one seems to fit

pranaglider said…
A weird blog post even for my low standards. I haven't been surfing in days. I fell asleep watching Pacific Vibrations (ripped off the news show bit from them) and woke up to an episode of Bullwinkle cartoons. "When the going gets tough the weird turn pro." Bring it on.
August 13, 2009 at 6:59 AM

Steve and Cher Pendo said…
Love it, too. We're waiting for waves, also, and have been ocean swimming lately, thankfully the water is clear. We saw some mackerel, a sand shark and an amazing school of rays in the last couple days. This morning there's some little shorebreak waves for the mats. Really enjoy your posts!
Cowa-flexit!
August 16, 2009 at 8:15 AM