I'm into flex and release
in my fiberglass boards
and you are too whether you think about it or not
Think drive to the bottom on take off, throw the bottom turn
(this is the loads up energy as the board flexes)
then use that energy temporally stored in the board to fling the board and rider down the line
(this converts the stored energy into the kinetic energy of the release)
So the latest issue of Surfer's Journal has been a real treat for me.
The article interviews several surf craft designers who are working to refine and build these concepts into the boards they make.
I especially like the bit on Steve Pendarvis as his boards seem to be closest to solving the problem of getting the "Greenough Effect" in a stand up board.
Great stuff, click on the link and check it out.
(Did I mention Steve rides a mat too?)

Rasta loading up a Pendoflex about to release the stored energy.
Elsewhere on the Flex Front
There were several blog posts over the last few days on a hybrid Alaia that Jeff made in his shop.
Copper Dove has made a hybrid Alaia that paddles and catches waves better that a standard Alaia. 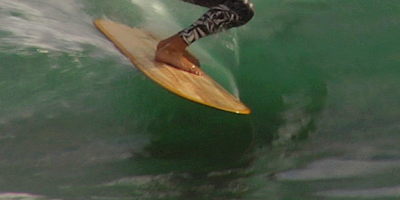 Photo grabbed from video shot by Matt Shuster which I ripped off RT's Wwaarrbblleess blog.

Check out Wwaarrbblleess and Hydrodynamica for more / better pictures.
The rider of a fin less Alaia also depends on flex to set the rail and provide the blistering speed these shapes are known for.
I especially like the neet sideways drift these boards are known for (Lala).
One day, maybe sooner than later, all this work on variable flex and general fin-less-ness will be merged into a ultra hybrid that tastes great and is less filling.
If they make it out of canvas and it provides variable inflation they'll call it a surf mat.
Until then, these designers have some created some interesting stuff to ride.

pranaglider said…
I should really check surfmatters before I post. Paul did a similar post on Jeff's Alaia.
August 17, 2009 at 7:52 AM

LeeV said…
How do the Pendoflex boards flex? I've seen them in the water a number of times and you sure can't flex anything on the board with your hands. The rails and tail are all foam and glass creating a pretty rigid structure surrounding a hole with magic stuff in it.