How many can you find? 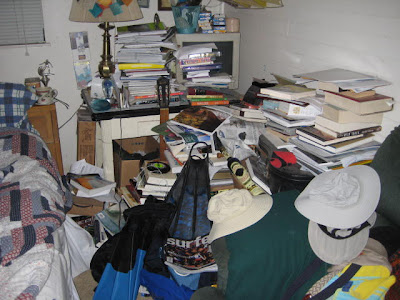 Yesterday on the Surfer's Journal facebook page they asked how many readers have a full collection. I do and so I replied and since they asked readers to send in a picture I did that as well.

Sometimes I never look at something until I take it's picture.

Now in my household it a well known fact that after I die my body will be discovered by firemen called to my domicile due to reports of all the unfed rowdy cats and the general funky smell.

Back to todays story.

After enduring many jokes over dinner and looking at the picture more I decided that there is a decent Highlight's magazine "can you find it in the picture" puzzle here.

So if you are playing the home game, open the picture above and try to identify the following objects in the pile.

The box my UDT's came in, five years ago - I never throw out a neat box

Surfmat - you were expecting something else?

Fins - part of the collection. Duck feet and UDT's with the drunken monkey mods

Surf wax - standard fathers day present for years, if you see me at the beach ask for some!

Surf movies - VHS, two different locations - 5 Summer Stories, Metaphysical, No Destination and Surfing Hollow Days. I think the DVD's are behind the pile

The last three or four years of Surfers Journals -

(The rest are in boxes at the bottom of the pile)

Two guitars (one's in its case) - worst guitar player in the world. don't ask me to play

Weather radio - back in the day this was Surfline and Adam Wright rolled into one. Still a handy item to have

Surfers Code - never turn your back on the water!

Surfing encyclopedia - not enough about mats! lots of other good stuff

Surf sculpture - You look thru a hole and it looks like you are looking out the tube!

Beach towel - I'll end with a easy one!

So how many did you find?

I have to say my wife is a really good sport and that the rest of the house doesn't look like this!

The garage is another matter...

BTW let me know what your collections look like

Surfsister said…
Oh my god!!! Don't even let the folks at the show Clean House see this picture!! They'll be at your door in a New York minute, talking about the "hot mess" that is your, uh, pile of, uh, things.

pranaglider said…
Yea it's some thing I've been working on for twenty plus years. Either I need book cases or I need to move or a fire.

The rest of the house is neet and tidy and my wife is a saint.

Beetlejuice said…
Nice Mancave bro! (As if surf sister has the chromosome to even comment)
August 2, 2009 at 6:43 AM

Surfsister said…
Ha!! Alright, so I'm not a dude and I don't completely get it. But you haven't seen our place. I'm no Martha Stewart either. The wall next to my side of the bed has a stack of Longboard mags, my box of wax, a couple of longboard fins and rolls of painters tape I use when I feel like having fun with the wax jobs on my boards.
August 2, 2009 at 3:11 PM

pranaglider said…
I'm tempted to post another shot that shows there is more organization to the pile than appears in the photo. I took the pic at a most unflattering angle. But I only offer the defense that I am much more interested in the content of the books than the look of the shelves. This after realization after visiting some friends with a lovely home, beautiful decor and no books. How do such people exist? What do they do at night?
August 3, 2009 at 6:31 AM

borntoloser said…
I love this picture and the corresponding activity. Oh, and we can't talk about what "those" peopel do at night...
August 3, 2009 at 6:56 PM

pranaglider said…
BTL - I assumed they eat fast food, watch TV, drink and breed. But I don't know for sure. Why can't we talk about it? American traditions
August 4, 2009 at 5:35 AM