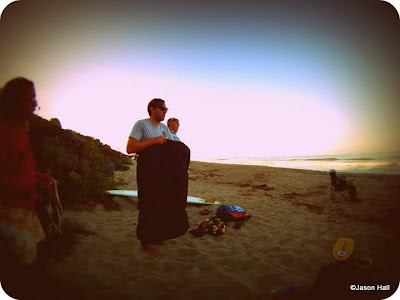 Another goody from Jason Hall.
How many Alt surf craft can you find in this picture?
Jason has gone on to a better place now.
And by that I mean Maui.
Visit his blog at Daily Bread

Some more random thoughts about the upcoming flurry of mat meets.

Instead of  one or two meets over the course of the summer how about one every weekend?

The problem with one or two is there is always a ton of people that can't make it that weekend  (says the guy that missed both the hand plane hoe down and the SDSFF).

The there is the surf or rather the lack there of same, which while not a complete show stopper, does put a damper on things.

"Hi, I'm Fred and I'll be surfing the south side of the Huntington Pier this saturday with my Green Jing Tinglers handplane."

Followed by a post that says, "Hi my name is Bob and I'll see you on the south side I'm bringing a matching pair of yellow Flu Floopers Floaters that I built myself"

So starting off slow then beginning to grow there could be Tar Tinkers and Who Hoovers and even Gar Ginkers to ride.

There could even be multiple meets happening up and down the coast or dare I say world wide on any given weekend.

Meet ups of like minded surfers, like your selves, that aren't finding surfing Nirvana riding a mass produced action sports - surf division - retail profit object produced by near slave labor and flown in to your local costco.

This can work to the extent that you put your own energy into it.

We can't all depend on Surf Sister to organize these things.

Imagine coming down to the local spot and seeing people sharing surf craft and waves.

Besides I always wanted to try an official "Dr. Seuss Who Wompers Handplane"

You just don't see those around much anymore