What was your first surfboard?

Glenn poised the question the other day on FB.

What was your first surfboard?

I have to admit I had to stop and think about it.

Literally overnight the standard 9 foot 6 inch noserider was out and 6 foot 9 inch plastic fantastic machines were the rage.

I grew up in Huntington Beach California with an older brother that was already well into the surf scene, and although I had already started surfing I had to go through that first winter riding borrowed boards without the benefit of a wetsuit to convince my parents that I was serious about, what was to them, just another passing teenage fad.

I had apparently passed that first test and got the go ahead to get a board.  I did what everyone else was doing.  I bought a long board,  rendered suddenly passe,  stripped the glass off it and shaped a new one out of the blank

Somewhere in the shaping process I bought a used short board (which I promptly cut the tail off of but that's another story).  That delayed the shaping long enough for the blank to be repurposed into two belly boards. My brother (always the leading edge one of the family) took the nose section,  removed the foam from most of the middle section and glassed twin fins on it. A spoon bellyboard with a square tail and twin fins. I really wished I had that today.  I think it would still be a fun ride. As for me I shaped (and I use the term very loosely) a tear drop with a single fin.    Not only did the board surf poorly but I made such a mess in the garage my Mom forbid any further such work. My resin and glass work was limited to ding repair from then on out.

Two things to take away from my story.

First off never back away from taking a perfectly good object and ruin it in the name of progress. The worst that could happen is the initial object is gone forever, you have made an incredible mess, and you may very well burn the house down with the toxic and oh so flammable ingredients.

Second, never underestimate the value of a friend with a shed. 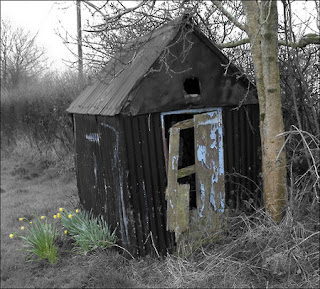 As a post script to the story I did go on the shape several more boards, complete with  semi-decent glass jobs.  I even went into the multi colored glass work so popular during the time.  I was know for producing color combinations that had heretofore never been scene outside of a diaper.