Southy was last seen dangling off my left foot! Has been sited frolicking in shore break in Encinitas. 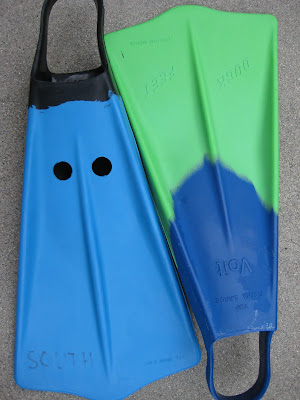 I have taken great care to train my fins from the time they are little flippers to come when I call them.

It takes a lot of time spent at a tide pool with flipper treats and a whistle but it is well worth the effort.

Perhaps a post on fin training at a later date.

But if you where looking for an inexpensive way to make your own fin tethers here is how we did it back before fin training became the rage. The new ones are more comfortable but these work as well as anything. Guys used to make them out of shoe strings but the cotton does rot after a while. Use nylon, it still rots but it takes longer

First you need some stout cord.  I put a couple of knots at the end of the cord. Thread  it around the side of the fin strap. Once you have the fin on you'll tie the two ends on the other side of your ankle. 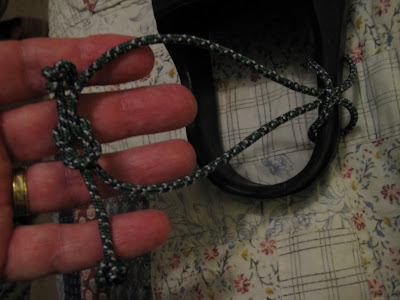 Do you like your photos under flashed or over flashed? I have included one of each for your viewing pleasure! 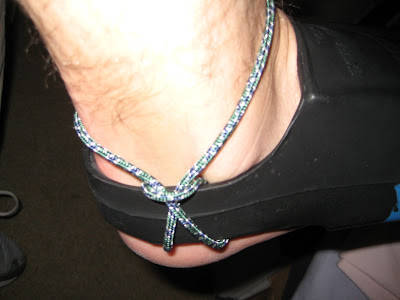 Inside ankle shot - *you can tie a knot here where the cord criss-crosses to keep the leash permanently attached.

Looks like I don't have a chance as either a product photographer or as an ankle model! 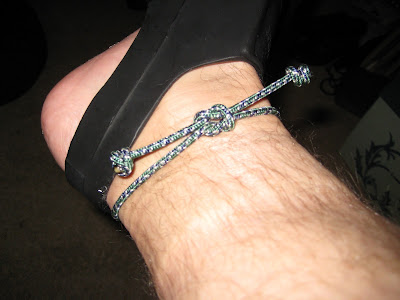 I like a square knot, easy to tie and will stay tied, maybe more importantly it's  not too difficult to untie with cold fingers.

(Never show pictures to your kids, mine said "look dad you've got kankles"! like a fool I had to go look it up...)

If you do loose a fin many local surf shops have a "single fin" barrel where you can buy just one.
I find find all the time at yard sales.