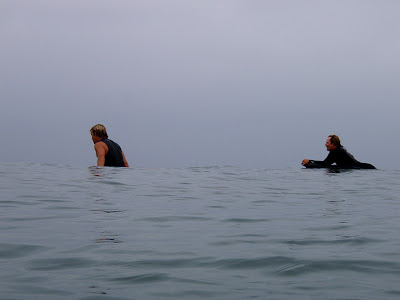 As with many things of this nature
there is quite a bit of debate
about the three most beautiful words
in surfing.

Stand up tube
I can't really argue with this one. A hollow wave large enough to stand up in is no doubt a thing of beauty even if I spend most surf days in a prone position. The stand up tube being just shy of the tube-so-big-you-can-drive-truck-through-it, but we don't get many of those here.

No one out
Since 23B is written, produced, directed and edited (somewhat) from the very bowels of the occasionally  sunny Southern California, the phrase "No one out" is hardly ever uttered, even in jest. But there are times when everything comes together when, and for a few precious moments it's not super crowded so I can definately see the beauty in these words.

Split the peak?
The beauty here is that it shows some proposed synergy to utilize a limited resource in an optimum manner.  Usually uttered between two other guys effectively shutting you out of the wave there by minimizing it's beauty.

Off shore wind
A great phrase in surf-o-logy. OSW can take a lumpy mix of swells and turn it into extremity numbing perfection. Off shore wind can also take a meek and mild swell and send it back whence it came leaving you without a thing to ride, except a bicycle. There is a milder version "variable winds" which is code for you better get on it fast because it's off shore now but it won't last. As a side note we haven't has a strong off shore condition in a while. One of those nights where your trash cans and the neighbors cat roll down the street at midnight, never to be seen again. Strong winds also mean some idiot will light the local chaparral on fire and burn untold  thousands of acres and the homes contained there in. Truly, a double edged sword.

One more wave
More an inside joke than not. If you take one more wave and it's a good one, it will sufficiently feed the flame of your stoke and you'll paddle back out for more, guaranteed. On the other hand if you get a crummy wave you paddle back out to so as to get a "good" one for your last wave. Only exhaustion or some immovable deadline ever makes you paddle in.

Out the back
Another gift from our Australian friends, this is a version of the simpler "outside".  Best uttered by lifeguards in a certain non valued tower during the sixties in between " no dogs on the beach, no dogs" and " please walk your bikes on the pier, walk your bike".  The lifeguards vantage point atop the pier allowing them to make sure no set waves went unused. Thanks guys

Back to School
This may truly be the very best three words in surfing!  Theoretically thinning the crowd, but between high unemployment and home schooling you might be hard pressed to see the difference, especially on a good swell. Back to school is a particularly welcomed phrase as it points to the changing of the of the seasons, a return to NW swells and  variable winds more common in the fall. 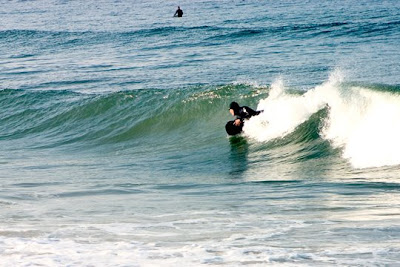 Photo by Graham Day of the Shelter Surf Shop

So that's it for a Thursday and my favorite surf related three word combos.

Feel free to contribute your favorites in the comments
Labels: back to school fall no one out off shore wind out the back repost split the peak stand up tube three little words

pranaglider said…
anon - That's a great one! along with the parallels Brand New Mat, Brand New Fins and Brand New Wetsuit!
September 27, 2012 at 11:16 AM

Steve and Cher Pendo said…
Go For It!