A re-post but an important one as the time frame for the Kickstarter program is coming to a close.

We have discussed this before, this is how the movies you really want to watch get made.  Steve really wants to make the movie, we really want to see the Rick Griffin story so we all have to chip in to produce it. If you want Hollywood or Bollywood for that matter to make your movies for you then you get what they want to produce and deliver. It's your choice. The link is down below.


The Life, Art and Raging Times of Rick Griffin

The Film: “Griffin” is a feature-length documentary that explores the art, life and eccentric spark of one of the world’s least known and most influential 20th Century surrealists. Over the time-warped span of the 1960's, one-time teen cartoonist Rick Griffin created defining icons for three pillars of west coast counterculture: surfing, psychedelic rock and underground comix.

Check the Kickstarter for the movie

I stumbled over the Rick Griffin website the other day, and as usual whenever I run into his work, I think back to the first time I saw this drawing or that poster.

His work is synonymous with not only early Surfer Magazine but his influence both of and by the San Francisco 60's scene cemented his standing as a great American artist.

His character Murphy is the archetype stoked surfer and will never be surpassed as the ambassador of stoke.

Griffins work is immediately recognizable,  there is an energy that comes from the work., be it poster, album cover, flyer or doodle.

The Laguna Art Museum did a retrospective showing of his work in the summer of 2007 that was fantastic.  I hope someone gathers enough of his material to do another show. (Nope they are doing a movie! See the Kickstarter link above)

I think my favorite part of the show (other than one of his personal boards) was that since his work was done in the pre-digital age you could walk up to an original work and see the blood and ink that went into it.

I'm super stoked to see a movie made about Griffin. I hope it's a good one. 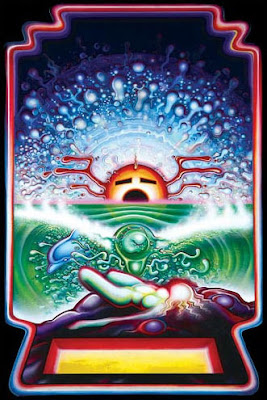