Photos from the shoebox

Going thru some old photos the other day, 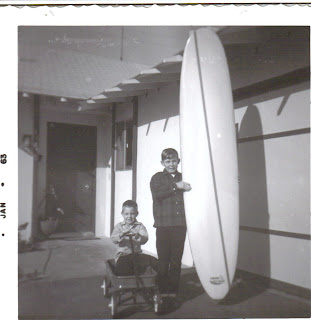 From the processing stamp and the cool jagged edges on the photo, this looks like presents from Christmas 63. I got the wagon but my brother scored a new board! I can’t make out the maker (I hope it wasn't a popout) Jeans (with rolled cuffs) white tee shirts and Pendletons were the surf wear of the day.

Once he got a board he made a rickshaw to pull behind his bike. Lots of new construction in the area so wood and carpet scraps weren't a problem and there wasn't a baby carriage within miles that had all its wheels! (They might also have been the wheels "borrowed" off my new wagon) 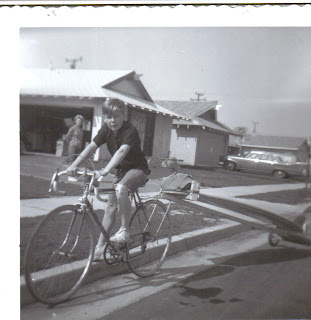 This was Spring of 1963.
Tons of tract houses sprung up in HB during the early sixties.
Bedroom communities for the growing OC aerospace economy.
Mom and Dad bought this 3 bdrm 2 bath house new for 19,500.
It’s still worth that today! But if you want to buy one now you had better bring a mil.

Everyone road their ten speeds and towed a board down to Bolsa Chica aka "tin can beach". 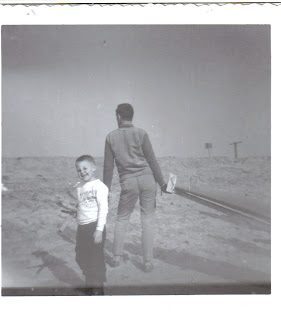 None of the faculties you find at Bolsa now, parking was just both sides of PCH (and it was free). You could still find rail road spikes in the sand from the Huntington railroad tracks. There were some great places for beach fires before they reshaped the beach and “upgraded” it into the uniform consistency you see today.

The first thing we did when we got to the beach was start a fire. If you waited until you came in from a surf you would be too cold. These were the days before good wetsuits (or any wetsuits as the case may be). You were cold and gnarly rashes were the norm. Wetsuits, well dive suits really, had rubber right up against your skin and it rubbed you raw paddling. Years later they added a nylon layer so you could slid into your wetsuit without baby power or corn starch.

The beach was such a great place to wander around and beach comb as a kid.  You could collect enough big “Pismo Clams” to make a huge pot of clam chowder just walking along in the shore break. If you were down in Laguna then abs and octopus were on the menu. 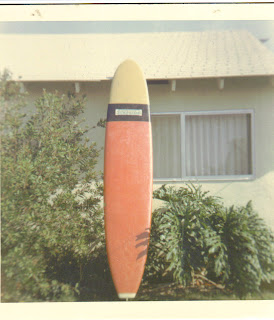 My brother’s new Surfboard surfside noserider, from a couple of years later. No dims come to memory, but 9’6” was the normal length of the day so I’ll go with that. I'm totally blanking on who shaped Surfboards Surfside I don't think there was a shop. There wasn't enough action sports merchandise to make a shop profitable in most places.  You just found out who made boards and stopped by their garage.  Ole sold his boards from what I swear was a tool shed on PCH. It was right where the Bruce Jones shop is today.

What happened to the squinty little toe head kid in the pictures?
Well he kept a sharp eye on his older brother and when he started making surfboard noises (which didn’t take long), his parents bought him a mat to keep him quiet. 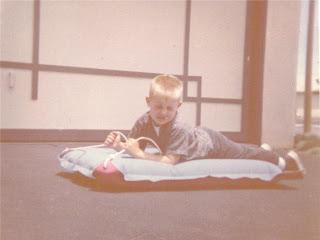 Glad you liked it!
Enjoy the season.