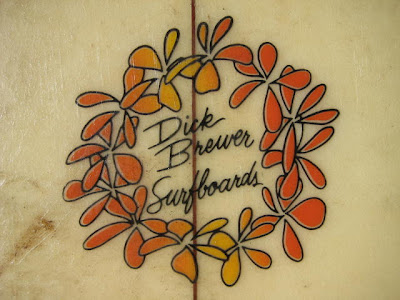 This board was my favorite for years!
I bought it used in town with my tax refund check when I was in college. 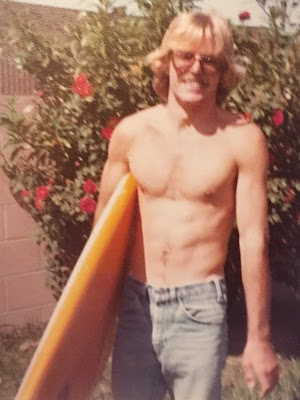 Say what you want about the glasses and the hair...they were different times.

Designed for the islands these shapes worked well in the short hollow sandbars at the local polluted rivermouth. Not as extreme as the 16 inch wide BK guns that worked so well at Sunset Beach Hawaii and not so well at Sunset Beach California. The hyper kicked nose Reno rode in the HB contest a few years earlier had (fortunately) come and gone as well.

The "Brewer Fins" were designed to be thicker so a layer of wood was laminated on each side. I also think it was faster to build up the panel they were cut from, it floated (somewhat) and it looked cool! The fins were foiled well but didn't have any of the rake or flex of the Greenough designs. You didn't get as much projection from the fin but the outline, rocker and rails more then made up for it. 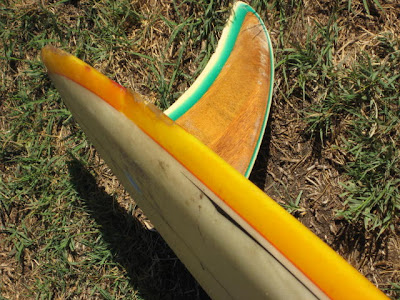 Cut laps, tints and pin lines, from back in the good old days!
Be kind to the guys that do pinlines, glass and sand.
They make or break a shaped blank.

I always liked the pin tail with wings!
Swallow tail with or without wings were good too. 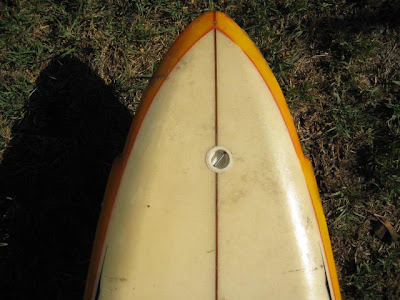 The tight corners made the wings tough to shape, glass and sand.
The surf leash demolished what material was left and this board
needs fill work on both sides to repair the damage. 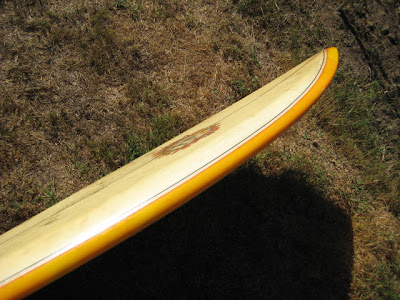 Bad photo angle makes the board look nine feet long.
And I should have cleaned it up first.
And my lawn looks like crap.
But other than that great shot! 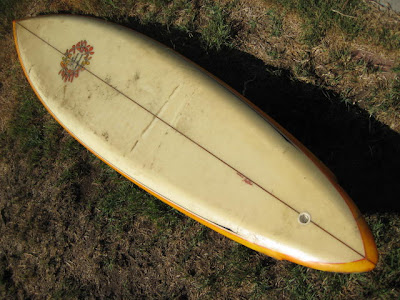 That little decal up from the leash plug says "Shaped by Joe Blair"
Thanks Joe! It was a good one.

These were classic dimensions at the time and since Brewer shaped a lot of the Clark blank plugs everyone shaped similar dimensions.

Of course with tri fins thing changed. The wide point moved back.  Much more rocker, continuous in some cases and two more fins which actually slowed the board down.  On the plus side the new boards turned well. But surfing changed. Look at the old film of guys riding Jeffreys Bay on single fins and then some current footage. Totally different.

A friend brought this T-shirt back from the islands for me. 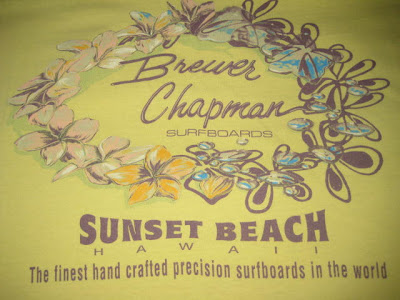 "The finest hand crafted precision surfboards in the world"

Brewer's list of innovations is too numerous to mention and the list of shapers who followed in his footsteps is longer still. Since he shaped the "plugs" the blanks all had a little "Brewer Magic"
Of course the shaper, glasser and sander had to polish the stone to get the magic to appear...

In the sixties and seventies, Brewer was "THE MAN" to get a board from when you hit the islands.

For a lot of people he still is. 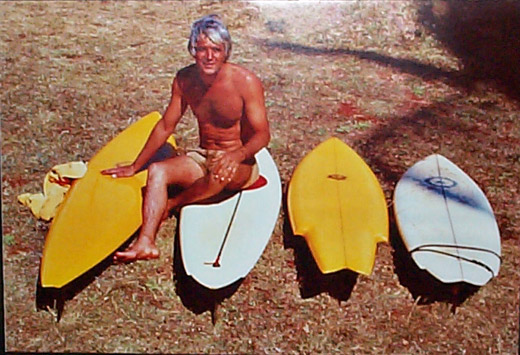 When it's big in the islands, people are still going for their Brewer's. 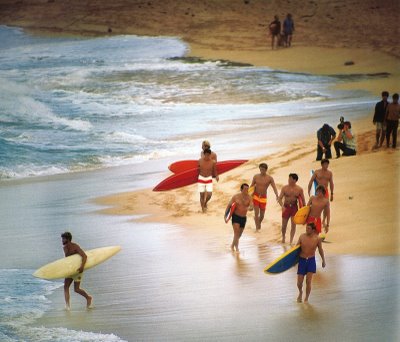 Unknown said…
Great post,Brewer's boards are beauties. No worries that one of his boards will run good when in bigger surf.
July 17, 2018 at 10:05 AM